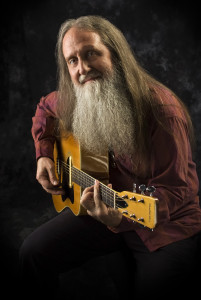 Born to musical parents, according to them, Jonathan Arthur was singing before he could talk. The oldest of five children, he was singing three part harmony with his siblings by the age of eight. As the son of a preacher, Jonathan naturally began singing in the church choir at an early age.

By the time he was in high school, Jonathan branched into a new direction and eventually joined a rock band as the lead singer. He was encouraged by his band mates to learn to play an instrument. Inspired by Herbie Mann and Ian Anderson (of Jethro Tull), Jonathan began teaching himself to play flute. At about the same time he also began playing guitar.

After high school, he played briefly with a band in Lawrence, Kansas. Impressed with the talent of the sax player, Jonathan purchased a saxophone, determined to learn to play it.

After leaving Lawrence, Jonathan moved to Tulsa, Oklahoma. It is there that two drummers he knew who had traveled to Jamaica first exposed him to reggae music. At about the same time, he became acquainted with Nigerian pop star, Ambrose Campbell, who at the time was the percussionist for Leon Russell. Ambrose was also a composer, and he and Jonathan spent long nights into daylight recording at Leon’s Shelter Records, his first taste of being a studio musician.

In 1985, due to his long-standing love affair with reggae music, Jonathan traveled to Jamaica, where he met and formed a friendship with Jamaica’s legendary Justin Hinds of Justin Hinds and the Dominoes. They found they had many common bonds beyond their love of reggae music: They were both preachers’ sons, preferred living rurally, loved gardening and farming, and were dedicated family men. All these things led to a deepening relationship of brotherly love and a professional music career together that lasted over a decade. They performed throughout the United States, Canada, and Europe.

By 2000, Jonathan gave up the rigors of touring and settled into playing closer to his home in New Mexico, where he joined a local blues band, The Motor Kings.

Encouraged by a friend, Jonathan moved to Paradise, California in 2003, where he started attending open mike sessions sponsored by Chico, California’s Midnight Blues Society. There he met many talented musicians and found a home for his love of the blues.

In 2003, Jonathan received the Sylphie Award from the Midnight Blues Society for Musician of the Year. In 2009, he received the Cammie Award (Chico Area Music Awards) for Best Male Vocalist, and in 2014 and 2015, one of his bands, Sapphire Soul, received the Cammies for Best Blues Act two years running.

Jonathan continues to perform regularly in the Chico area music scene, both as a solo artist and along with several bands, delivering his soulful renditions of songs to enthusiastic audiences.